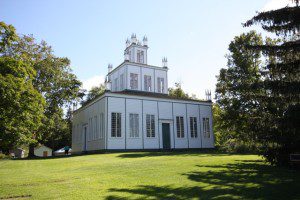 Sharon is a quaint little town nestled between the equally small Queensville and the ever-busy Newmarket. Originally named Hope, this area was settled by an offshoot sect of Quakers known as the Children of Peace, whose influence remains highly visible to this day thanks to the stunning Sharon Temple. This iconic structure, also known as the Temple of the Children of Peace, was completed in 1832 and stands as the centerpiece of the Sharon Temple National Historic Site, which also includes nine other historic buildings within its park setting. 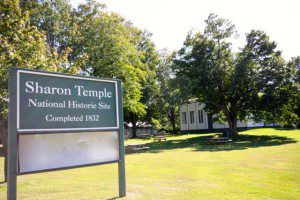 The Temple’s architectural elements express a singular religious vision of the most striking beauty that never fails to elicit awe. Taking inspiration from the Bible, the Temple contains three tiers and incorporates four-fold symmetry, lanterns and pinnacles. Its three storeys represent the Trinity and the four central pillars each bare their own name: Faith, Hope, Love and Charity. Leading to the musician’s gallery above is a gently curved staircase known as Jacob’s Ladder. The Temple contains facilities to comfortably seat 150 guests as well as 4.5 acres of natural and guarded parkland perfect for outdoor ceremonies. There is no better venue to host a special event or wedding ceremony during its availability between mid-May to mid-October each year. 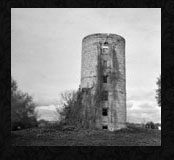 The North York Drive-In has been a popular destination since 1955. This family-owned theatre began modestly with a single screen and later expanded to three screens and a fully stocked snack bar. Increasing popularity prompted the expansion to three ticket booths to speed visitor entry and the addition of AM/FM stereo sound so movie-goers are able to listen through their own vehicle radios. There is a children’s playground onsite to appease the youngsters before the movie starts. Long weekends are especially fun with an extra movie added to the venue without a price increase.

Get out and play a round at the Pheasant Run Golf Course, noted for having rolling terrain not found in any Toronto-area course. The course offers three distinctive nine-hole courses allowing combinations of play time and time again.

This entry was posted on Friday, August 5th, 2011 at 8:18 pm and is filed under Communities. You can follow any responses to this entry through the RSS 2.0 feed. You can leave a response, or trackback from your own site.