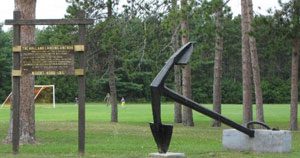 Holland Landing traces its roots all the way back to 1793 when it was named St. Albans. Governor John Graves Simcoe discovered the site and believed it would make an ideal shipping and defense point between York (now Toronto) and Georgian Bay. It was renamed Holland Landing in honor of Samuel Holland, first Surveyor General of British North America. He served under Captain John Simcoe, for whom Lake Simcoe was named, on the HMS Pembroke. Though it was conceived to be an inland port for Lake Simcoe, via the Holland River, it never served this purpose in any real capacity. During the war of 1812, when the British attempted to re-take the entire lake system, a large anchor was being transported to the shipyards in Kingston. This anchor was over fifteen feet long and weighed approximately 4000lbs and made it as far as Holland Landing when the war ended. Today this anchor serves as the gate guard at Anchor Park.

The town proper was not formed until the early 19th century, settled by the same Quaker immigrants as Aurora and Newmarket. It was here that a martyr of the 1837 rebellion, Samuel Lount, was captured while operating a smithy. He was convicted of treason and hanged on April 12, 1838. 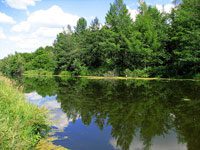 Holland Landing today is built on the service industry and light manufacturing. It has three primary schools in Holland Landing Public School, Park Avenue Public School and Good Shepherd Catholic School. The Nokiidaa Trail System, named for an Ojibway term meaning ‘walking together’, offers a tranquil hike that follows the Holland River all the way to Aurora. It is a multi-use, non-continuous trail that features a number of access points. The York Region Recreation Departments offers free guides for those who wish to partake in all the trail offers.

The Holland Landing Airpark is a privately owned and operated attraction that is home to one of the largest heated indoor hangars. The 30,000 square foot hangar is well-maintained and situated perfectly between the uncluttered Canadian northland and the busiest airspace in Canada to the south. The Airpark offers a superb training environment for aspiring pilots of all abilities and interests.

This entry was posted on Friday, August 5th, 2011 at 7:53 pm and is filed under Communities. You can follow any responses to this entry through the RSS 2.0 feed. You can leave a response, or trackback from your own site.