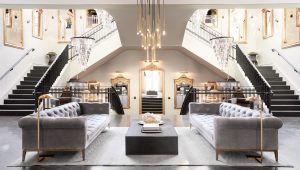 The stairway has always been the architect’s obsession. The ziggurats of ancient Mesopotamia are the first examples of ceremonial stairs that put worshippers closer to the gods. The Romans invented the spiral, or helical stairway, later adapted as a tactical defense in the castles of medieval Europe. (Attackers ascending a clockwise spiral found their sword arms against the wall.)

Staircases found their grand, monumental forms during the Renaissance, culminating with Donato Bramante’s double helix at the Vatican and Michelangelo’s triple staircase at the Laurentian Library in Florence. The late 16th century brought the imperial, or double, staircase, which became the predominant style of the Baroque and, later, Neoclassical movements.

In the 20th century, star architects like Frank Gehry and Rem Koolhaas seemed to focus entire buildings around their stairways (while Renzo Piano hid them away). They and their contemporaries used steel, concrete, hardwoods, and glass to create sculptural staircase designs. This Luxury Defined collection features seven homes, each with its own vision of the staircase, from the classic to the ultra-contemporary.

A magnificent four-story staircase with carved-wood balustrades ascends to an ornate ceiling dome in this royal palace in Portugal’s Vinho Verde wine region.

The centerpiece of this historic quinta, encompassing nearly 100 acres in Portugal’s Vinho Verde region, is an opulent four-story mansion reminiscent of a royal palace. The ornate façade, adorned with beautiful blue mosaic tiles, opens to a grand foyer with an imperial staircase ascending four stories to a magnificent ceiling dome. Vaulted and coffered ceilings, frescoed walls painted by hand, and finishes of exotic wood and marble add to the grandeur. The residence is surrounded by formal gardens, which lead down to the banks of the River Ave. The wine estate is composed of mature vineyards and a commercial winery with an oenology lab, cellars, warehouses, agricultural buildings, and a caretaker’s house.

Shining Hand Ranch, on 700 private acres, is itself a work of art. The foyer, with dramatic carved staircase, was handcrafted by local artisans to echo the flow of a river.

A 700-acre estate in the foothills of the Siskiyou and Cascade mountain ranges in southern Oregon, Shining Hand Ranch was both inspired and informed by its enchanted woodland setting. Completed in 2016, the 8,880-square-foot sanctuary was handcrafted with accents of exotic wood and river rock to echo the organic flow of nature. Flanked by beautiful copper tree sculptures, the dramatic arched front doors are Brazilian mahogany, sculpted by local artist Russell Beebe. Inside, the dazzling foyer is adorned with a hardwood floor that seems to flow like a river. Overlooking the valley from a wall of windows, the upstairs master suite is a treehouse-like retreat with a beautiful domed cedar ceiling. The home’s architecture and amenities not only honor nature but function in concert with it: the floors are heated geothermally and the endless pool, housed in an adjacent glass building, is solar heated.

At this trophy waterfront villa, a French-inspired stairway wraps around an entrance hall with a breathtaking view of Sydney Harbour.

A landholding of ultimate privacy and sophistication, the Nook is one of Sydney’s finest waterfront estates. The property was reimagined three decades ago in the style of a French villa, custom-designed to accommodate large families and all the pleasures of the Sydney waterfront lifestyle. Scenic water vistas are enjoyed from nearly every room of the stately five-bedroom main house. A classic French staircase wraps around the entrance hall, framed by a view of Sydney Harbour. Vast terraces overlook the landscaped gardens with level lawns, a pool, spa, and cubby house. At the water’s edge is a permanent private jetty and pontoon, a boathouse with an upper level studio space, a slipway, and a sandy beach on the Lane Cove River, an estuary west of Sydney Harbour.

The imperial staircase in the great hall of this Colonial-style residence in Saddle River, New Jersey, harks back to the splendor of a bygone age.

This Colonial-style manor on more than six acres in the hills of northern New Jersey is a haven of luxury and privacy just 17 miles from Midtown Manhattan. The palatial main residence offers 17,000 square feet of living space with nine en suite bedrooms, including two master suites, and eleven full and two half bathrooms. The focal point of the entrance is a grand staircase. Other ornate artisanal details include a spectacular indoor pool area with a glass ceiling inspired by the Louvre Pyramid, and a mahogany-panelled library with an English-style bar. A car-collector’s dream garage, outdoor entertaining areas, including covered pavilions, gazebos, a large stone veranda, and a seating area with fire pit are among the superb amenities.

A curved staircase built from solid wood with wrought-iron balustrades lends to the old-world ambience at this chateau-inspired home in Houston’s Royal Oaks Country Club.

The grand entrance to this French-inspired residence in Houston’s Royal Oaks Country Club is a 26-foot-high vestibule adorned with Doric columns and floors of white marble, a crystal chandelier, and curved staircase with hand-carved wrought-iron balustrade. Farther along are elegantly appointed formal living and dining rooms, and a gourmet kitchen with butler’s pantry. Other highlights include an elevator, dual master suites, a theater with Paramount surround-sound and 120-foot screen, and two garages with room for four vehicles. The private grounds are enhanced with a formal garden and pergola, a 60-foot lap pool, an outdoor fireplace, and a pavilion overlooking the country club’s Fred Couples Signature golf course.

A monumental mahogany staircase connects to three levels of this classically inspired manor house in the New York Tri-State area. There is also an elevator servicing all four floors.

Discovery Manor is a world-class 160-acre horse farm and resort-style family compound located within an hour of New York City. The main entrance opens to a long driveway that sweeps past acres of fenced paddocks to arrive at a motor court with an impressive stone fountain. The classically inspired main house presents 25,000 square feet of artisan-crafted and exquisitely furnished interior spaces that invite grand-scale living and entertaining. Yet this house is also a home, warm and inviting and lovingly built for the comfort and enjoyment of family and friends. Among the stately features is a grand staircase, crafted from hand-rubbed mahogany with a decorative iron balustrade, which connects to three levels of the home. There is also an elevator servicing all four floors.

This entry was posted on Wednesday, February 13th, 2019 at 3:14 pm and is filed under Blog, Christie's, City Home / Country Home, Lifestyle, Lifestyle Trends. You can follow any responses to this entry through the RSS 2.0 feed. You can leave a response, or trackback from your own site.